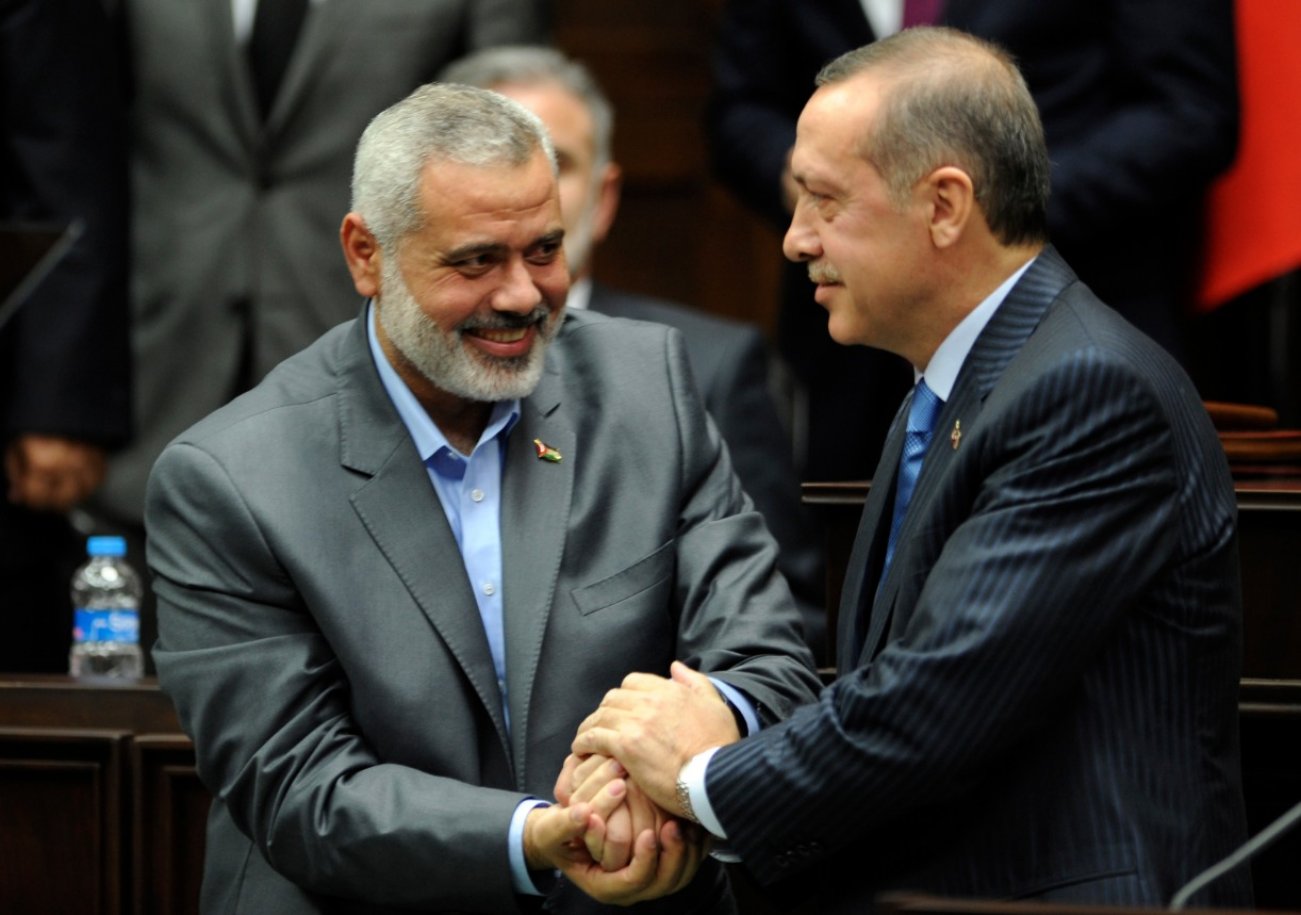 The normalization of ties between Israel and these two Gulf states reflects a broader struggle between competing regional camps over the contours of a regional order.

In the wake of the recent peace agreements between Israel and both the United Arab Emirates (UAE) and Bahrain, much of the public analysis and commentary has focused on what normalization may portend for Israel’s relations with other Arab countries, prospects for peace between Israel and the Palestinians, and the triangle of relations between the United States, Israel, and the UAE. A less considered, but equally significant, dimension of the agreements concerns their implications for the broader region of the Middle East and North Africa—both in terms of what the accords reveal about deeper trends characterizing the regional system today and what the reactions to the agreements may signal about the region’s trajectory in the near future.

Beyond the proximate triggers fueling these agreements—the specter of annexation in Israel, combined with the UAE’s wish to extract as much as possible from what may be an outgoing Trump administration, and to endear Abu Dhabi to a potentially ascendant Democratic Party in time for the November elections—the normalization of ties between Israel and these two Gulf states reflects a broader struggle between competing regional camps over the contours of a regional order. While the roots of that struggle date back several decades, developments unleashed by the uprisings of 2011 sharpened divisions between these camps, as the regional order itself was severely shaken by the events of that year and their aftermath.

The first camp comprises Iran and its mostly Shiite allies (and proxies) across the region, including various militias in Iraq, Bashar al-Assad’s Syria, and Hezbollah in Lebanon. The Houthis in Yemen can also be included in this grouping, as can the Palestinian Islamic Jihad in Gaza, despite the latter’s Sunni identity. A second cluster includes the Sunni states which have coalesced—in rhetoric if not always in practice—around the goals of countering Iran’s efforts to extend its influence across the Middle East and, more recently, diminishing the influence of the Muslim Brotherhood and derivative Sunni Islamist movements that briefly appeared ascendant after 2011. These countries are usually referred to as “moderate” or “pragmatic” because of their generally positive ties to the West, their belief in the primacy of sovereign nation-states over any transnational entity or identity, and their relative openness to Israel’s presence in the neighborhood; they include the UAE, Saudi Arabia, Egypt, Jordan, Bahrain, and Morocco. A third camp comprises the Sunni states and movements sympathetic to the Muslim Brotherhood: Turkey, Qatar, Hamas in Gaza, and the handful of Islamist political parties still dotting the region. Promotion of political Islam is not the only, or in some cases even the dominant, rationale motivating the behavior of these actors, but it remains a key element of their self-legitimating strategies and a central factor explaining their regional alliances. Finally, a fourth grouping comprises the remnants of Al-Qaeda, ISIS, and affiliated jihadist movements across the region.

As the contest between these camps has intensified, three additional realities have emerged in the last decade with direct bearing on the recent peace agreements. First, the Iranian-led axis has been relatively cohesive, which is not the case for the three remaining camps. Al Qaeda and ISIS, for example, consistently perceived each other as threats rather than allies, despite the jihadist groups’ ideological affinities. And the Sunni pragmatic states have tended to form ad hoc alliances based on immediate threat perceptions and available capabilities rather than longer-term strategic goals, in part because they have differed among themselves in their prioritization of the two main threats of Iranian expansionism (of greater concern to Riyadh and Manama) and Muslim Brotherhood-style Islamism (the principle fear for Abu Dhabi and Cairo). As a result, this camp has had difficulty countering Iranian expansionism and snuffing out the remaining embers of political Islam.

Second, Israel has increasingly solidified its standing as an ally of the Sunni pragmatic camp, evidenced by its years-long military campaign to frustrate Iran’s entrenchment in Syria, its quiet military assistance to Egypt in the Sinai, and its widely presumed, if until now largely covert, security cooperation with the various Gulf states which share the perception of a threat emanating from Tehran.

And third, although relative military power continues to play a role in shaping threat perceptions and driving alliances across the region, soft power has become an increasingly significant driver of regional developments. Qatar has emerged as a regional player not by dint of its own military accomplishments but rather through a skillful use of its massive hydrocarbon wealth—some of which has funded military operations of allies in the region such as Turkey and Hamas—and its hosting of an influential media outlet, Al-Jazeera. If all eyes are on Saudi Arabia’s next moves (will Riyadh normalize or not?), it is not because the kingdom possesses a particularly impressive military arsenal but because it wields significant influence across the region through financial leverage and religious legitimacy as the host of Islam’s holiest sites.

The agreements inked in Washington on September 16 constitute “Exhibit A” of the core trends described above. The longstanding struggle between the camps, the varying degrees of cohesiveness among these rival groupings, Israel’s emergence as a key ally of the Sunni pragmatic bloc, and the rise of soft power as an increasingly significant determinant of regional affairs—these developments collectively fueled Abu Dhabi’s (and then Manama’s) decision to publicly embrace an alliance with Jerusalem. And while it is too early to judge the implementation of the agreements, it is reasonable to assume that to the extent normalization strengthens the pragmatic Sunni/Israeli camp, it will likely deepen regional divisions between the pragmatists and the Islamists on the one hand, and between the pragmatic and Iran-led camps on the other. Several scenarios could unfold.

The first would entail a further erosion of stability in the Eastern Mediterranean. There, what began as a scramble for access to natural gas and a dispute over maritime borders between countries lining the East Mediterranean basin has morphed into an increasingly hostile confrontation between Turkey (and, in the background, Qatar) on one side and an alliance between Greece, Cyprus, Egypt, Israel, Jordan, and the UAE on the other. At their origin, the tensions in the Eastern Mediterranean were locally driven, but over time both Erdogan’s growing assertiveness and the UAE’s subsequent desire to check Turkish ambitions have increasingly implicated the Eastern Mediterranean in the broader struggle for influence between various Middle Eastern camps. The war in Libya—where a stalemate has set in between Turkish/Qatari-backed forces and Egyptian/Emirati-backed forces (alongside Russian mercenaries)—is perhaps the most glaring example, and could be a prelude to greater unrest in this arena if Erdogan perceives the latest normalization agreements as yet another attempt to isolate him.

A related, but more dramatic, possibility is that the perception of an ascendant “pragmatic” camp will lead to the consolidation of a Turkish-Qatari-Iranian camp, i.e., a merging of the current Turkish/Muslim Brotherhood camp with the Iranian axis. A signal of this possibility came shortly after the normalization agreements were announced—and roughly one month after Erdogan hosted two Hamas leaders in Istanbul—when Hamas’s political chief, Ismail Haniyah, traveled to Lebanon to meet with Hezbollah leader Hassan Nasrallah. This was Haniyah’s first trip to Lebanon in nearly thirty years, the stated purpose of which was to reinforce the “stability” of the “axis of resistance” against Israel. Turkey’s growing support for Hamas in the past decade, and Qatar’s bankrolling of the Hamas government could lead these countries to increasingly find common cause with Iran.

A third and especially intriguing scenario would entail a shift in the orientation of the Assad regime in Syria. Of all the reactions to the recent normalization agreements, Assad’s relative silence was perhaps the most surprising, given the Syrian regime’s ostensible reliance on Tehran, its steadfast rhetorical support for the Palestinian cause over the years, and its longstanding hostility toward Israel. But the muted reaction of the Assad regime to the recent agreements probably reflects Damascus’s desire to be welcomed back into the Arab fold after several years of relative ostracism, and it almost certainly reflects Assad’s calculation that he will likely need Emirati money to stay afloat—yet another indication of soft power eclipsing the relevance of military might. It will be important to watch carefully the unfolding dynamics in Syria, especially if they are a prelude to a deeper shift in the orientation of that regime and even more profound changes in the makeup and strength of the Iran-led camp.

Precisely because predictions about the trajectory of Middle Eastern politics are fraught with uncertainty, policymakers in Jerusalem will need to consider what the reactions to normalization might reveal about potentially shifting dynamics in the region as a whole, and especially the evolving makeup and balance of power between its various blocs. Nearly a decade after a series of uprisings upended the regional order, the recent normalization agreements may well turn out to be an aftershock of considerable magnitude.

Dr. Sarah Feuer, an expert on politics and religion in North Africa, is the Rosenbloom Family Fellow at the Washington Institute for Near East Policy.