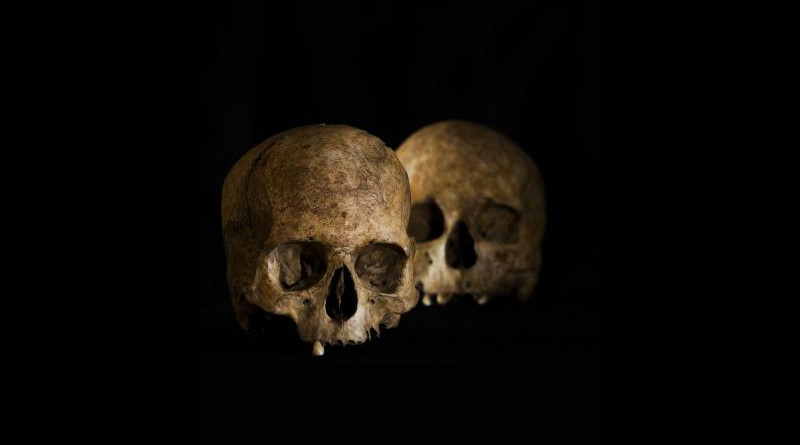 Experts from the Department of Prehistory and Archaeology of the University of Seville have just published a study in the prestigious journal PLOS ONE on an important archaeological find in the Cueva de la Dehesilla (Cádiz). Specifically, two human skulls and a juvenile goat were discovered along with various archaeological structures and materials from a funerary ritual from the Middle Neolithic period (4800-4000 BC) hitherto unknown in the Iberian Peninsula.

“This finding opens new lines of research and anthropological scenarios, where human and animal sacrifice may have been related to ancestral cults, propitiatory rituals and divine prayers in commemorative festivities,” explains US researcher Daniel García Rivero.

The archaeological site located in the Cueva de la Dehesilla consists of two adult human skulls, one male one female, the former being older. The female skull shows a depression in the frontal bone, which probably comes from an incomplete trepanation, as well as cuts in the occipital bone produced by decapitation. In addition, a wall was found separating the human skulls and the skeleton of the goat, on the one hand, from a stone altar with a stele and a hearth, on the other. Finally, several uniquely decorated ceramic vessels, some lithic objects and charred plant remains were discovered in the so-called Locus 2.

“These elements display various characteristics that make it an exceptional archaeological find. The differential treatment of skulls with traumatological evidence along with sacrificed animals, as well as the documented archaeological structures and materials do not match the normative funerary record we were working with until now. This discovery is of great importance not only because of its peculiarity, but also because it constitutes a sealed, intact ritual deposit, which is a great opportunity to gain a more detailed insight into the funerary and ritual behaviours of the Neolithic populations of the Iberian Peninsula”, emphasises professor García Rivero.

This work contributes in a particular way to the knowledge of the funerary rituals of the middle part of the 5th millennium before Christ, currently the least well known period of the Neolithic populations of the Iberian Peninsula as a whole. The scarce funerary record from that time shows fundamentally individual burials, with secondary burials being unusual. The sort of context just discovered is really extraordinary. Burials usually occur in areas of habitat, and are mostly associated with remains of ceramics and shells, as well as homes, which reflect the importance of activities related to the use of fire, but without stone structures like those now documented in the mountains of Cádiz.

The study and review of the entire funerary record of this period allows us to offer a kind of cultural mosaic in relation to the funerary and ritual traditions of these peasant and herding populations, with a probable division between the Andalusian region and the eastern seaboard of the peninsula, the two regions where most data is available today.