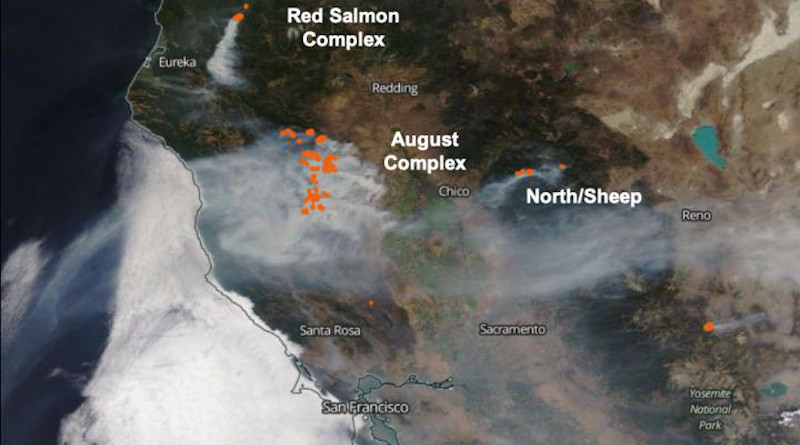 Wildfires have been burning across the state of California for weeks – some of them becoming larger complexes as different fires merge. One of those was the August Complex Fire, which reportedly began as 37 distinct fires caused by lightning strikes in northern California on Aug. 17. That fire is still burning over a month later.

The August Complex Fire and others this fire season have been sending far-reaching plumes of wildfire smoke into the atmosphere that worsen air quality in California and beyond. Predicting where that smoke will travel and how bad the air will be downwind is a challenge, but Earth-observing satellites can help. Included among them are NASA’s Terra and CALIPSO satellites, and the joint NASA-National Oceanic and Atmospheric Association (NOAA) Suomi NPP satellite. Together, the instruments on these satellites provide glimpses at the smoke over time, which can help improve air quality predictions.

“The satellite instruments have the advantage of providing broad coverage and consistent measurement accuracy over time, as well as making their observations without any risk to the people taking the data,” said Ralph Kahn, a senior research scientist with the Earth Sciences Division at NASA’s Goddard Space Flight Center in Greenbelt, Maryland, who studies aerosols. Kahn and other atmospheric scientists at NASA collect data about the fires from Earth-observing satellites used to improve models that predict how wildfire smoke will affect air quality downwind of the fires.

One of the instruments on NASA’s Terra satellite is the Multi-angle Imaging Spectroradiometer (MISR), which has nine different cameras pointing toward Earth at different angles. As Terra passed over the August Complex Fire on Aug. 31, MISR collected snapshots of the smoke plume from different angles.

Scientists look at those different perspectives to calculate the extent and height of the smoke plume downwind, as well as the height nearest the source of the fire, called the injection height. That information is essential for determining how far the smoke will travel.

On Aug. 31, the highest parts of the plume from the August Complex Fire reached approximately 2.5 miles (4 kilometers) into the air – putting it above the boundary layer of the atmosphere, which is the layer of the atmosphere nearest to the Earth’s surface. The fresh smoke plume extended at least 30 miles (45 kilometers) east of the burning area near Mendocino National Forest in northern California. Over the previous few days, smoke from this fire had already traveled more than 310 miles (500 kilometers) to the west and over 460 miles (750 kilometers) east of the source, crossing into Utah and out over the Pacific Ocean.

The MISR instrument also collected information about the amount, size, and brightness of the particles within the smoke plume based on how the particles scatter light at different angles and wavelengths. These data give researchers information about the characteristics of the wildfire smoke in order to predict how it will move and affect air quality. For example, the southern part of the smoke plume emitted by the August Complex Fire on Aug. 31 was made of mostly small, dark particles usually released when a fire is burning intensely. But as the plume moved downwind, the particles became larger and brighter, possibly because water or other gases emitted by the fires condensed on the smoke particles.

MODIS: A Snapshot of Wildfire Hotspots

Individual wildfires and large conflagrations of merged fires burning throughout the state – and the accumulated smoke they produce – make it difficult to see the actual flaming hotspots from space. But the Moderate Resolution Imaging Spectroradiometer (MODIS) aboard NASA’s Terra satellite can see the longer wavelengths of nonvisible light, or infrared radiation produced by the heat coming from actively burning wildfires. In other words, MODIS can sometimes see through smoke even when our eyes can’t by comparing the higher infrared radiation from hotspots to the lower radiation coming from the surrounding area.

As it passes over the Western U.S., MODIS can see a swath about 1,430 miles (2,300 kilometers) wide – about the distance from central Utah to almost 70 miles into the Pacific Ocean – providing valuable context about what’s going on with the fires and smoke over the Western U.S. MODIS pinpointed multiple clusters of fire hotspots in the August Complex Fire, which had consumed over 240,000 acres by Sept. 2.

“The fire extent is huge in this case, and the smoke plumes can travel hundreds or even thousands of kilometers,” said Kahn. “The satellites provide not only context, but also information about the relationships between different fires.” During its pass overhead on Aug. 31, MODIS captured the August Complex Fire as well as several other fires and larger complexes of fires burning to the north, south, and east. Seeing the relationships between the fires offers clues to which fires are likely to merge in subsequent days.

CALIPSO and Suomi NPP: Seeing the Extent of the Smoke

The smoke plumes from California’s wildfires have engulfed many cities and towns throughout the state, turning the sky an apocalyptic shade of burnt orange. In other areas, the sky is a hazy gray, and flecks of ash float through the air. But in some regions of the West Coast, the sky looks relatively normal – even if there are smoke particles in the air – because there are too few smoke particles for our eyes to detect.

That’s where NASA’s CALIPSO satellite comes in. CALIPSO has a laser onboard that shoots bursts of laser light toward Earth. When that light hits something, such as particles in a wildfire smoke plume, it is reflected back to sensors on CALIPSO. Although the laser light is too weak to cause any sort of damage, the light reflected back to the satellite by smoke particles tells scientists a lot about the smoke even when the plume is too transparent for them to see with their eyes. As the plume from the August Complex Fire was carried west, CALIPSO detected smoke several days old descending from about 2.5 miles above land to within a mile of the ocean’s surface as it crossed the California coastline.

CALIPSO can tell the difference between clouds and smoke, which can sometimes be hard to do by looking at a satellite image. Knowing where the smoke is in relation to clouds allows researchers to see the interactions between clouds and smoke, which can affect the characteristics and spread of the smoke. For example, sometimes clouds ingest and modify smoke particles, and can even remove them from the air when it rains. Other times, dark wildfire smoke particles can absorb sunlight, becoming warm and heating the atmosphere, which can cause clouds to evaporate.

NASA’s CALIPSO satellite captures detailed data, but it has a narrow field of vision. The satellite observes along a two-dimensional vertical “curtain” that slices through the smoke plume as it passes overhead, collecting detailed measurements of the type and position of wildfire smoke aerosols in the atmosphere. Scientists then turn to three sensors aboard Suomi NPP, collectively called the Ozone Mapping and Profiler Suite (OMPS), for context. Those sensors get a broader but less detailed view of what’s going on with the smoke particles in Earth’s atmosphere, which allows scientists to figure out what CALIPSO is homing in on and make better extrapolations based on CALIPSO’s data.

The instruments aboard satellites in NASA’s Earth-observing fleet provide extensive data, unavailable from any other source, enabling researchers to gain a better understanding of wildfire smoke and how it affects air quality. In cases like the current wildfires across California, NASA’s atmospheric scientists studying the fires collaborate with the NASA Earth Science Disasters program to share their findings with firefighters and public health officials. NASA Disasters program partners with local and regional agencies on the ground, helping get the data from NASA’s satellites into the hands of those who need it most.

“Our work is primarily helpful in improving the models that forecast air quality,” said Kahn. “This is a team effort and when we can help, we certainly do.”