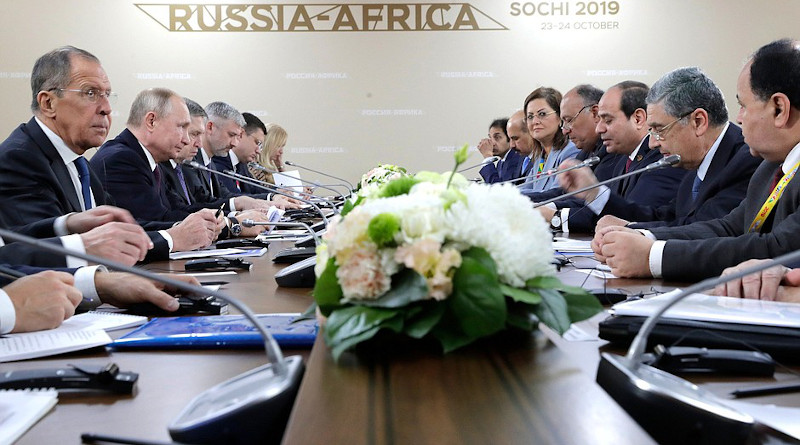 Egypt’s plans to build a nuclear power plant in Dabaa (a city on the Mediterranean Sea), in agreement with Russia’s ROSATOM, are underway. This policy briefing describes the politics behind the project. To do so, it first provides a background of the project, including a historical overview of Egyptian proposals and pauses in terms of nuclear energy development. Each of the country’s past presidents harboured nuclear aspirations, which are only now coming to fruition. Second, it illustrates the ways in which the nuclear energy venture is the crowning glory of a series of mega-projects with a techno-nationalist undertone currently pursued by the Egyptian government.

Egypt’s nuclear ambitions have a long history. The country launched a civilian nuclear programme in 1954, two years after its independence from the UK. The aspiration was based on a combination of technological modernism and hopes of playing a leadership role in the Arab world and the Non-Aligned Movement. The idea of a nuclear programme – even a nuclear energy programme – is thus historically associated with national pride, and each of the country’s presidents has had nuclear aspirations. After more than 60 years, Egypt’s nuclear dream is finally being realised.

Origins and history of nuclear energy in Egypt

In 1958 Egyptian president Gamal Abd al-Nasser acquired a pilot plant from the Soviet Union, which became operational three years later at Inshas – and is still operational today, in a facility focusing on industrial and agricultural research. Under Nasser, Egypt began to invest heavily in nuclear science and technology, and, compared with the rest of the Arab world, had highly trained nuclear scientists.1This investment reflected its early motivation to pursue a nuclear weapons programme.2In 1964 Nasser proposed Sidi Krir (west of Alexandria) as the site of a facility with a nuclear reactor, but the project never materialised. The Six-Day War in 1967 ultimately overshadowed these plans.

After Nasser’s death, his successor Anwar al-Sadat sought to restart the project, but it also failed to take off. In 1974 Sadat issued a joint statement with US president Richard Nixon, announcing US plans to assist Egypt with the construction of nuclear power plants subject to International Atomic Energy Agency (IAEA) safeguards. These plans fell apart shortly afterwards amid US concerns in the aftermath of the Indian nuclear test, which demonstrated how civilian nuclear technology could be used to develop a military nuclear programme.3

In 1981 a presidential decree by then president Hosni Mubarak suggested Dabaa as the site of an electricity-generating power plant. The site was deemed to be the most feasible one for the project, based on studies contracted by the Egyptian government.4This was attributed to its proximity to water, distance from the seismic belt, groundwater movement, and low population density.5However, Egypt’s pursuit of the reactors was frozen indefinitely in 1986, owing to concerns following the Chernobyl disaster in Soviet Ukraine.6

During the 1990s the capacity of the Inshas reactor was increased. Egypt acquired another research reactor from Argentina in 1992, also placed at Inshas and inaugurated in 1998. In addition to the two research reactors, the Inshas facility consists of a pilot plant for low enriched uranium fuel manufacturing7and a pilot-scale conversion plant (all under the safeguards of the IAEA) as well as an accelerator, a heavy-water laboratory and a cyclotron.

Under Mubarak, plans to construct a nuclear power plant were revived in September 2006 as a result of increasing energy needs coupled with rising oil and gas prices.8 The project was proposed by Mubarak’s son, Gamal, who had played a role in Egypt’s economic liberalisation and was widely perceived as being groomed for succession.9After the project gained parliamentary approval, Cairo signed a $200 million contract with Australian engineering consultancy firm WorleyParsons in 2009 to advise on the specifications of the power plant.10

In the period between 2011 and 2013, after Mubarak was ousted in the wake of the Arab Spring, the project was not cancelled or officially frozen but little progress was made. Dabaa was still deemed the most suitable site for a nuclear reactor, although the Fukushima Daiichi disaster in March 2011 led to renewed questions about nuclear energy and safety.11

Residents of Dabaa, who were still being relocated, became vocal in their opposition to the project and the government’s unrealised promises of development.12Amid the revolutionary fervour of the Arab Spring, thousands of residents of Dabaa and other neighbouring towns staged frequent sit-in protests at the site. These protests resulted in clashes that left several people injured and led to a semblance of a grassroots anti-nuclear movement.13

The project was restarted in earnest in 2014 after Abd al-Fattah al-Sisi became president. Sisi managed to strike a deal with the Dabaa community – they would halt their opposition and in return a new tourist city would be constructed in the area, along with other shortterm benefits. The armed forces, which are involved in an array of construction projects, became the main interlocutors with residents, and subsequently built the new Dabaa city at a cost of EGP14 1 billion (approximately $62 million), where residents are expected to be given new homes in compensation.15

Mega-projects and a return to techno-nationalism

Sisi’s approach to economic development is based on the establishment of mega development projects. Examples of these include the expansion of the Suez Canal (inaugurated in 2015 to a great deal of fanfare); the construction of a new administrative capital on the outskirts of Cairo,16among dozens of proposed ‘new’ cities; and a new largescale Egyptian Museum. This approach, along with Egypt’s history of ambitious yet failed projects,17provides the context in which the nuclear energy project must be understood.18

The professed objective of the Dabaa power plant is to achieve self-sufficiency in energy amid the growing demands of an increasing population (currently estimated at 100 million people). Yet the project has also continuously been framed as one of national prestige. In political speeches the plant has been likened to other moments celebrated and commemorated in Egyptian national discourse, such as the 1973 October War.19

Another indication of the project’s techno-nationalist aspect is its localisation. This was given as one of the reasons why Egypt chose the Russian proposal (along with its having no political conditionalities).20According to reports in 2017, the Nuclear Research Centre at Inshas employs 1 400 scientists in the fields of nuclear science and engineering, as well as 2 300 technical and 1 300 administrative staff.21The Nuclear Power Plants Authority (NPPA) has emphasised the government’s prioritisation of further indigenous expertise, such as the bid to nationalise nuclear technology.22However, despite the discourse of localisation and nationalism, there are concerns that the project is creating a reliance on international expertise and materials, leaving Cairo vulnerable and potentially jeopardising its aim of selfsufficiency.

Currently, the Dabaa project is funded mainly through a loan from ROSATOM of $25 billion, repayable over 22 years.23The rest of the money will be raised by the Egyptian government. While reports state that China, France, Japan, the US and South Korea had also submitted tenders for the project, the process through which Russia was chosen was not open to the public.24The official website of the State Information Service of the Egyptian government simply states that the decision was made ‘after in-depth studies’.25Similarly, the head of the NPPA, Amjad al-Wakil, alluded to the internal nature of the decision-making process, stating: ‘After studying the result of the negotiations with these countries, Russia was chosen as a strategic partner to participate in implementing the Egyptian nuclear programme.’ 26Al-Wakil has argued that the nuclear power plant will bring Egypt revenues of over $264 million over its 60-year lifespan, but it is unclear how he arrived at this figure.27

Meanwhile, basic information, such as what will be done with spent fuel, has not been clarified, despite the associated risks. Some sources suggested that Egypt would export spent fuel to Russia, where it would be placed in uniquely fortified glass bottles before being sent back to Egypt for storage.28Such a re-importing practice raises a number of compliance issues. When asked about the risks of this agreement, the head of the NPPA dismissed it as a rumour. Spent fuel, he said, would be kept in containers and potentially used for other technologies; after 100 years it would be disposed of after ‘applying the proper methods followed in all states worldwide’.29This confusion and misinformation can be attributed to a lack of consultation in the public space, as well as a lack of transparency in the tender process.

After the August 2019 nuclear explosion at the Russian naval testing range in Severodvinsk, civil society expressed growing concerns over the safety of the Dabaa reactor. The explosion took place at a ROSATOM-controlled test base and killed five nuclear scientists, leading Egyptians to question the company’s expertise and whether the same mistakes would be repeated during construction at Dabaa. They questioned whether there were potential technical defects in modern Russian reactors. The Egyptian government argued that these fears were ‘misplaced and exaggerated’.30

In response to general concerns regarding radioactive material, Egyptian official sources frequently refer to ROSATOM sources, declaring that Dabaa will be the ‘world’s safest and … fully fortified against any earthquake’.31The head of the NPPA also said that ‘[a]ll safety and security factors related to the construction and operation process and all the following stages have been taken into consideration’.32He stated that, using the ‘most recent technological methods in the world’, the reactors would be designed to automatically shut down in the event of a malfunction. Indeed, the NPPA’s official website has a section on ‘safety’ that similarly emphasises technological responses to safety concerns.33This combination of technological fetishism with national prestige has been the driving force of these top-down modernist projects, at the expense of public consultation and transparency.

After five decades of to-ing and fro-ing by successive governments over Egypt’s construction of a nuclear power plant, the project is now officially in progress. It has been treated as a strategic and symbolic national issue that is beyond debate or consensus. As a nationalist mega-project, the nuclear power plant needs to be contextualised and understood through this political framework, rather than merely assessed according to energy and/ or economic aspects. In particular, the reluctance to discuss any risks associated with the reactor is worrying, demonstrating both an ideological commitment to the project and a technological fetishism.

Acknowledgement: SAIIA gratefully acknowledges the support of NORAD for this publication.

*About the author: Heba Taha is an affiliate with Nuclear Knowledges at Sciences Po Paris and a lecturer at Leiden University in the Netherlands.

Source: This article was published by SAIIA