The Trump administration, in a global first, issued sanctions on Iran’s space program, which has long operated as a front for Tehran’s advanced work on nuclear capable ballistic missile technology.

The latest sanctions come as Tehran’s economy teeters on the brink in the face of the Trump administration’s tough economic penalties. The new sanctions are significant as the first time an American administration has targeted Iran’s space program and acknowledged it is all part of Iran’s nuclear weapons industry.

Iran last week took renewed steps to launch rockets and satellites as part of its space program. The latest launch is believed to have ended in catastrophe, according to satellite photos and a subsequent image of the destruction disseminated on Twitter by President Donald Trump.

The technology and know-how needed to conduct these strikes is similar to that used to fire intercontinental ballistic missiles, which could carry a nuclear payload, the Trump administration said.

“Space launch vehicle (SLV) technologies, such as those developed by Iran’s space program, are virtually identical and interchangeable with those used in ballistic missiles,” the State Department said in information provided to reporters on the new sanctions. “Iran’s civilian space launch vehicle program allows it to gain experience with various technologies necessary for development of an ICBM—including staging, ignition of upper-stage engines, and control of a multiple-stage missile throughout flight.”

The new sanctions target Iran’s Space Agency and two of its affiliated research institutes “for engaging in proliferation-sensitive activities.”

Secretary of State Mike Pompeo said in a statement that the Trump administration would not stand by and pretend Iran’s space program is separate from its nuclear weapons work.

“The United States will not allow Iran to use its space launch program as cover to advance its ballistic missile programs,” Pompeo said. “Iran’s August 29 attempt to launch a space launch vehicle underscores the urgency of the threat. These designations should serve as a warning to the international scientific community that collaborating with Iran’s space program could contribute to Tehran’s ability to develop a nuclear weapon delivery system.”

The United States maintains that this type of work directly violates United Nations Security Council Resolution 2231, which codified the landmark nuclear deal and calls Iran to stop testing such military hardware. If the United States is able to make its case to the U.N. in coming weeks, Tehran’s space launch could result in the snapback of all international sanctions that were lifted under the nuclear agreement, known by the acronym JCPOA.

“Our actions today show the flaws in the Joint Comprehensive Plan of Action (JCPOA), why the United States was right to cease participation in it, and the importance of achieving a deal that prevents Iran from developing ballistic missile capabilities that could contribute to a nuclear weapon delivery system,” the State Department said. “This is why Secretary Pompeo has called for a new comprehensive deal that addresses all elements of Iran’s malign behavior.”

“Further, Iran’s accelerating pace of missile activity demonstrates the pressing need to return to the ballistic missile prohibitions contained in UNSCR 1929, which includes the legally-binding provision that Iran shall not undertake any activity related to ballistic missiles capable of delivering nuclear weapons,” according to the State Department. “We have been clear with our fellow Security Council members about the importance of holding Iran accountable for its defiance of resolutions related to the development and proliferation of ballistic missiles—which includes returning to the standard in UNSCR 1929.” 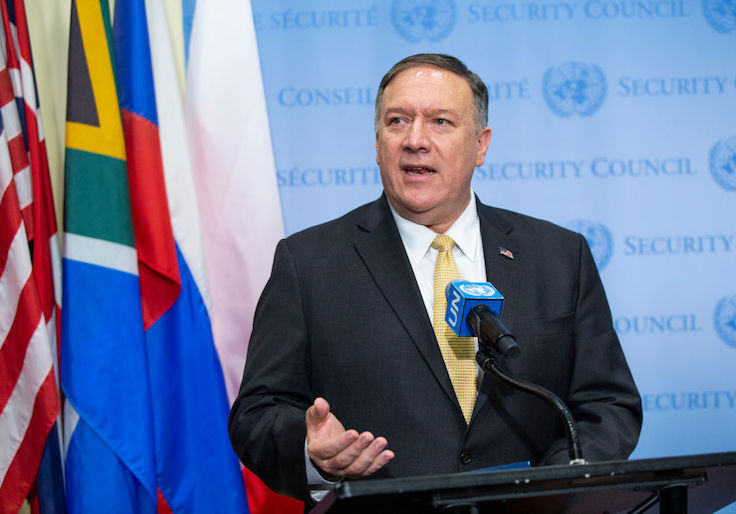