Senate Republicans issued a sharp rebuke to several of their Democratic colleagues Thursday in a letter to the clerk of the Supreme Court, accusing them of threatening the independent judiciary.

The letter, signed by every Republican senator, attacks an amicus brief five Democrats submitted earlier in August. According to the Republicans, the brief went beyond mere legal arguments, and “openly threatened this Court with political retribution if it failed to dismiss [the case in question] as moot.”

The controversy stems from a major Second Amendment lawsuit, New York State Rifle & Pistol Association Inc. v. City of New York. New York City prohibits licensed handgun owners from transporting their handgun to any place outside city limits. The plaintiffs argue that such laws restrict an individual’s ability even to transport a gun to a second home for purposes of self-protection and violate the Second Amendment and the “constitutional right to travel.”

After the Supreme Court granted the NYSRPA’s petition for hearing, the city changed its laws, de facto remedying any constitutional issues. Under the Constitution, courts cannot try purely hypothetical issues, ensuring that the cases before the Court concern actual harm. Because of its new law, the city asked the Supreme Court to declare the case moot for lack of standing.

On August 12, five Democratic senators—Sheldon Whitehouse (R.I.), Mazie Hirono (Hawaii), Richard Blumenthal (Conn.), Richard Durbin (Ill.), and Kirsten Gillibrand (N.Y.)—asked the Court to assent to the city’s request and declare the case moot. They alleged that to do otherwise would reinforce the “growing public belief that [the Court’s] decisions are ‘motivated mainly by politics.'” The group—which at the time included a 2020 presidential contender—further accused the Court of blatant partisanship, insisting that in a series of closely decided cases, “corporate and Republican political interests” consistently prevailed.

The conclusion of the brief stirred controversy and prompted the Republicans’ letter.

“The Supreme Court is not well,” Whitehouse and colleagues wrote. “And the people know it. Perhaps the Court can heal itself before the public demands it be ‘restructured in order to reduce the influence of politics.’ Particularly on the urgent issue of gun control, a nation desperately needs it to heal.”

Republicans saw the conclusion as an unambiguous threat to pack the Supreme Court if it did not dismiss the case.

The idea of adding additional judges to the Supreme Court, or restructuring it entirely, is popular among 2020 Democrats. Sens. Elizabeth Warren (Mass.) and Kamala Harris (Calif.) have explicitly called to pack the Court; former Texas representative Robert O’Rourke has said the idea is worth exploring. South Bend mayor Pete Buttigieg and Vermont senator Bernie Sanders (I.) have called for restructuring the Court altogether.

The appointment of Justices Neil Gorsuch and Brett Kavanaugh by President Donald Trump have tilted the Supreme Court decisively to the right. That tilt is unlikely to change until the retirement of Justice Clarence Thomas, which is unlikely to happen any time soon. Adding justices would permit a Democratic president to influence decisions toward his or her desired policy outcomes—but only, the Republican senators argued, at the cost of judicial independence.

“Only an independent judiciary can ‘guard the Constitution and the rights of individuals from…dangerous innovations in the government, and serious oppressions of the minor party in the community,'” the letter says, citing Alexander Hamilton in Federalist 78.

“Democrats in Congress, and on the presidential campaign trail, have peddled plans to pack this Court with more justices in order to further their radical legislative agenda,” the letter continues. “It’s one thing for politicians to peddle these ideas in Tweets or on the stump. But the Democrats’ amicus brief demonstrates that their court-packing plans are more than mere pandering. They are a direct, immediate threat to the independence of the judiciary and the rights of all Americans.”

The Senate GOP takes no view on the underlying constitutional questions in NYSRPA v. NYC, but the letter strongly cautions the judicial branch against bending in the face of the five Democrats’ attempt to “browbeat this Court into ruling against [constitutional] rights.”

“We therefore ask that the Justices fulfill their oaths to ‘faithfully and impartially’ follow the law,” the letter concludes. “They should rule in this case only as the law dictates, without regard to the identity of the parties or the politics of the moment. They must not be cowed by the threats of opportunistic politicians.” 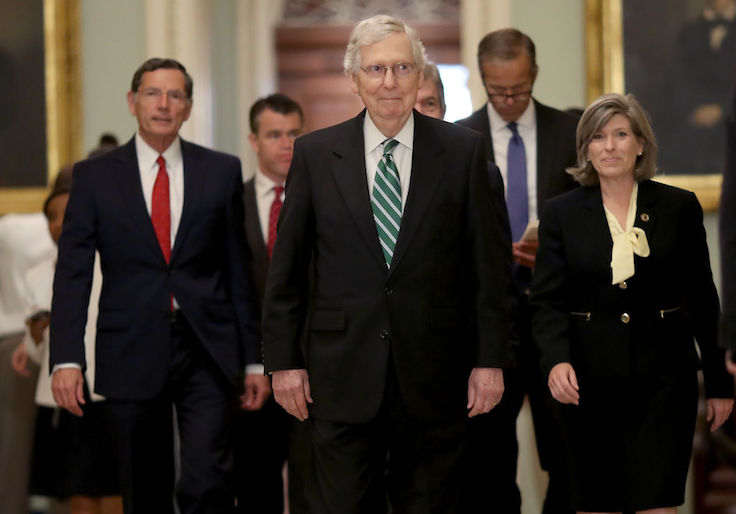